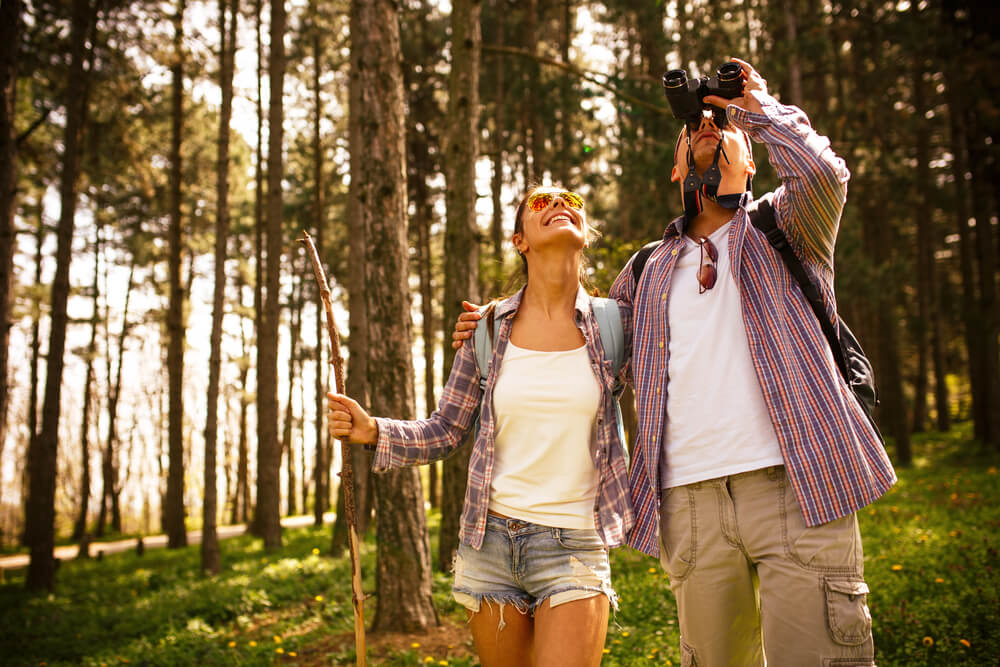 With nearly three dozen well-documented hiking trails (and countless unmarked hidden gems) inside Whiteshell Provincial Park, it’s no wonder why couples from Winnipeg flock to Tallpine Lodges. There are several ways to explore Whiteshell Provincial Park’s serene sprawling acreage, including hiking, kayaking, and fishing. However, many particularly adventurous couples are rethinking the way they survey this peaceful land. Tallpine Lodges remains the most enticing weekend getaway in Manitoba for couples, mainly because we offer so many complimentary toys, such as canoes, bicycles, and tennis racquets. But, perhaps, this time around, give one of these three unique activities a try whole traversing through the vast Whiteshell Provincial Park.

It’s hard to trace back exactly when and where birding, or “birdwatching,” was conceived. Many claim that it dates back to the dawn of man or perhaps during Shakespeare’s era. Regardless, birding wasn’t truly documented until the late 19th century. Since then, nature enthusiasts have been frequenting Whiteshell Provincial Park with a pair of binoculars dangling around their necks in search of a diverse array of birds. Talented birders often spot great grey owls, ruby-throated hummingbirds, grosbeaks, ruffed grouse, American coots, redpolls, northern flickers, merlins, and, of course, bald eagles. If you’re never heard of the ancient Japanese art of “forest bathing,” you’re not alone. Forest bathing only became somewhat popularized in the U.K. and North America in the past two or three years, thanks to articles published by Time Magazine, NPR, National Geographic, and The Guardian. Dr. Qing Li also wrote a book on the subject in 2018. It’s an educational and enlightening read that many have labelled a “medical technology landmark.” It’s exceedingly difficult to forest bathe with children or stir crazy individuals. Thus, it’s couples who often relish the opportunity to merely walk into the wilderness, hand in hand, without saying a word. The silence speaks volumes. Focus on your five senses, particularly sound, sight, smell, and touch.

There are dozens, if not hundreds, of caches hidden inside Whiteshell Provincial Park, including the woodlands that encircle Tallpine Lodges. Brian’s Tackle Box, Broken Bridge, A Fiery Birth, Little Church, and a handful of others are within walking distance of our romantic Whiteshell cabin rentals. Caches dot the banks of both West Hawk Lake and neighbouring Falcon Lake, much to the delight of true adventurers. Geocaching® is the world’s largest treasure hunt, and it’s rapidly growing into one of our guest’s most beloved mid-day activities. The time to start planning a late-summer or autumn couples retreat to Manitoba’s pristine Whiteshell Provincial Park is right now! We boast some of the most affordable yet undeniably tantalizing cottage rentals in Manitoba. When you’re not cycling around the lake, meandering through the wilderness, or sunbathing in the sand, return to your cottage for an unforgettably relaxing evening. Each cabin features a private sauna, electric fireplace, large Jacuzzi tub, patio, grill, fully-furnished kitchen, and satellite television. Please don’t hesitate to reach out with any questions via telephone (866-349-2209). You can also check availability online.